Copyright: © 2021 Tang S, et al. This is an open-access article distributed under the terms of the Creative Commons Attribution License, which permits unrestricted use, distribution, and reproduction in any medium, provided the original author and source are credited.

Introduction: To investigate the effectiveness of DuHuo JiSheng decoction (DHJSD) versus Western medicine, and explore the mechanism of DHJSD in the treatment of lumbar disc herniation (LDH).

Methods. Eight databases were searched to retrieve the randomized controlled trials (RCTs), and a systematic review and meta-analysis was performed by Review Manager 5.4. Then, a network pharmacological analysis was carried out, in which core compounds and targets were identified, and protein-protein interaction (PPI) network was constructed. In addition, Gene Ontology (GO), Kyoto Encyclopaedia of Genes and Genomes (KEGG) pathway enrichment analyses as well as molecular docking were performed.

Lumbar disc herniation (LDH) is one of the most common spinal disorders caused by intervertebral disc degeneration (IVDD), which leads to low back pain (LBP) and sciatica [1]. It was reported that 30% of world population may suffer from LDH during their lifetime [2], and almost 85% of patients with sciatica may be attributed to LDH [3]. LDH imposes heavy burdens on patients, families, and governments in the world. Therefore, the treatment of LDH is an extensive concern in medical fields.

LDH can be treated via conservative or surgical therapies, and most of patients can recover based on conservative treatments, such as medication, exercise, epidural steroid injection, chiropractic manipulation, and physical therapy. Western medicine, including non-steroidal anti-inflammatory drugs, paracetamol, and opioids, play an important role in the treatment of LDH. However, these drugs have undesirable side effects and irreversible toxicity to digestive, urinary, and cardiovascular systems, leading to acute liver failure, myocardial infarction, and increased mortality [4-6].

Moreover, the exact mechanism of DHJSD for LDH remains unclear, which can’t be clarified by traditional pharmacology, as the multi-compound, multi-target, and multi-pathway characteristics of Chinese herb decoction. In recent years, network pharmacology, an emerging field, can characterize the action mechanisms of complicated drug system in detail from molecular to pathway level by visualizing ‘multi-compound, multi-target, and multi-pathway’ interaction network [11]. As a result, we speculate that the active compounds, targets and signal pathways of DHJSD can be explored and analyzed by network pharmacology, and the mechanism of DHJSD may be clarified.

Therefore, a systematic review and meta-analysis as well as a network pharmacological analysis was performed in the current study. Our objectives were (1) to investigate the effectiveness of DHJSD versus Western medicine, and (2) to explore the treatment mechanism of DHJSD in treating LDH.

This systematic review has been developed in accordance with the Preferred Reporting Items for Systematic Reviews and Meta-Analyses (PRISMA) [23] guidelines [12].

The inclusion criteria were: (1) RCTs; (2) LDH was diagnosed based on symptoms, signs, and imaging examinations; (2) The experimental group was treated with DHJSD or DHJSD plus Western medicine, but the control group treated with Western medicine alone; (3) The outcome measurements, including visual analogue scale (VAS), Japanese orthopaedic association scores (JOA scores), and total effective rate were reported.

The exclusion criteria were: (1) Repetitive studies. (2) Patients have other complications, such as tumours, vertebral fracture, epidural abscess, spondylolisthesis, and lumbar stenosis. (3) The experimental group consists of acupuncture, manipulation or other external treatments as adjuvant therapy. (4) Data were incomplete or wrong.

Data extraction and quality assessment of the included trials were carried out by two researchers independently. Data extraction included the information of first author, publication year, sample size, age of patients, gender, interventions, treatment duration, outcome measurements, and adverse events. Quality assessment was performed according to the Cochrane risk of bias tool, which consists of the following seven items: (1) randomization, (2) allocation concealment, (3) blinding of outcome assessment, (4) blinding of participants and personnel, (5) incomplete outcome data, (6) selective reporting, and (7) other bias. Each item has three levels, including high risk, low risk, and unclear risk. Discrepancies were resolved by discussion with a third researcher.

The chemical compounds of DHJSD were screened out from Traditional Chinese Medicine Systems Pharmacology Database (TCMSP, http://tcmspw.com/), in which oral bioavailability (OB) ≥ 30% and drug-likeness (DL) ≥ 0.18 were set as criteria [13]. Based on the same platform, the targets corresponding to compounds were extracted. R and Strawberry Perl software were used to obtain gene symbols after standardizing gene names. The targets related with LDH were retrieved from Gene cards (https://www.genecards.org/) and OMIM (https://omim.org/). The drug-disease cross targets were identified in Venny (https://bioinfogp.cnb.csic.es/tools/venny/). The gene symbols of cross targets were uploaded into STRING database (https://string-db.org/), and the TSV files were exported to construct protein-protein interaction (PPI) network. The core targets were screened based on the frequency of occurrence.

Three-D structures of core targets were downloaded from RCSB PDB database (http://www.rcsb.org/) as receptors, and Mol2 format files of core compounds were downloaded in TCMID as ligands. Using AutoDock Tools, the receptor and ligand proteins were converted into PDBQT files, then the molecular docking was performed. PyMOL and Discovery studio software were utilized to visualize the best affinity conformation. 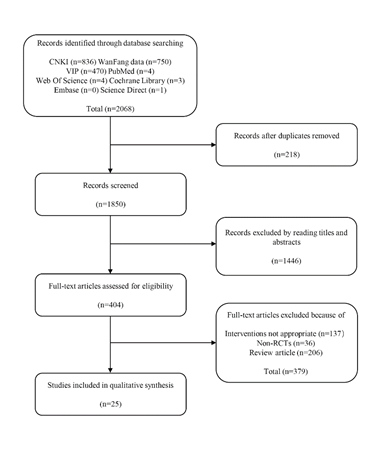 In 25 trials, the patients were randomly assigned to experimental or control groups. In terms of the randomization sequence generation, two trials used random number tables, two trials used coin tossing, two trials used computer random number generator, and one trial used drawing of lots. Eighteen trials did not mention the randomization methods in details. No trials mentioned allocation concealment. One trial reported double blind method. Two trials reported follow-up. All the trials reported complete data. The basic characteristics and the quality assessment of the trials are shown in Appendix A and B.

As the heterogeneity was high between these trials, subgroup analysis was performed and the trials were divided into two subgroups according to different interventions in experimental group, i.e., DHJSD plus Western medicine and DHJSD subgroups.

A total of seven trials reported adverse events (Figure 2d). Thirty-seven cases of gastrointestinal reaction, six cases of rash, and one case of facial edema occurred in control group; ten cases of gastrointestinal reaction and two cases of rash occurred in experimental group. In the subgroup of DHJSD plus Western medicine, no significant difference was found in adverse event rate between the groups (RR = 0.67, 95% CI [0.08, 5.72], P > 0.05). However, in the subgroup of DHJSD, a significant difference (RR = 0.2, 95% CI [0.09, 0.42], P < 0.05) was found between the groups. 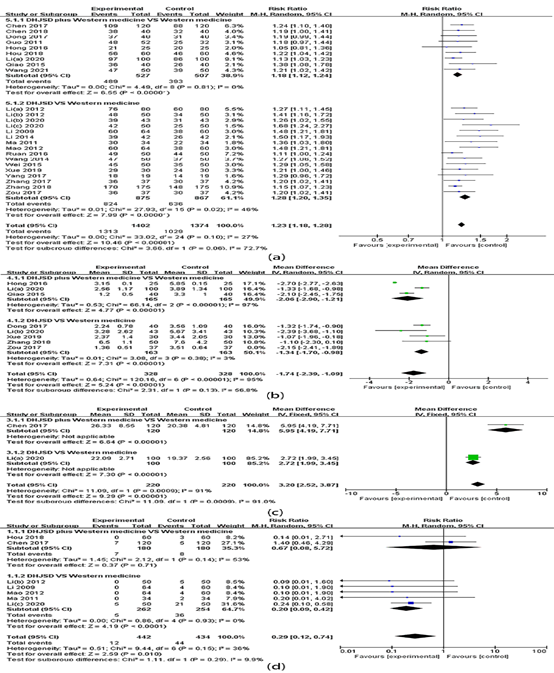 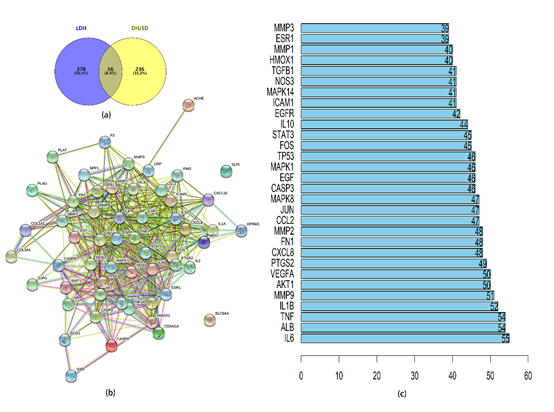 Figure 3. Analysis of the protein targets. (a) The Venny diagram. (b) The PPI network diagram. (c). The frequency of targets (X-axis: the number of edges joined by the target). 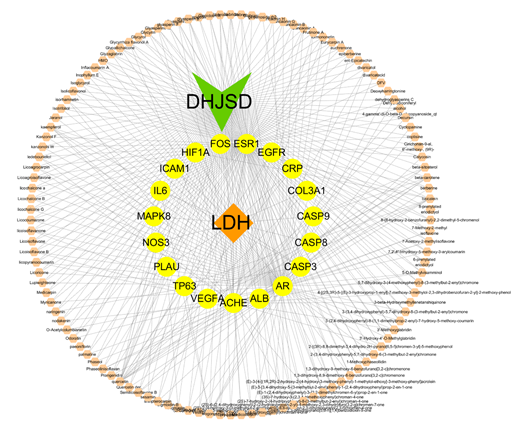 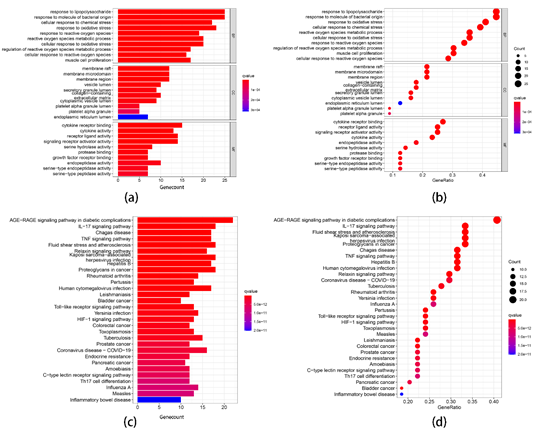 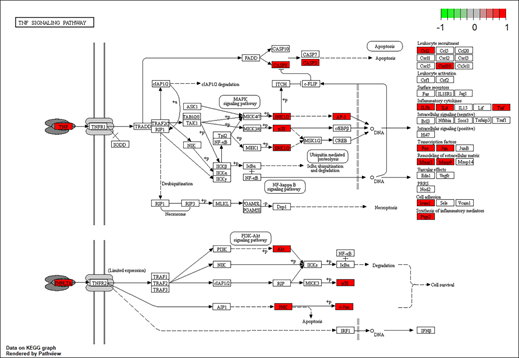 There were strong binding effects between the eight ligands and nine receptors. The binding energies were all less than 5 kcal/mol in Table 1, and the interaction of van der Waals’ Forces was widely observed. In addition, hydrogen bonding was also the form of interaction in figure 7. IL6 and quercetin, TNF and wogonin, MMP9 and quercetin, and FN1 and wogonin were closely bound to residues via these hydrogen bonds: SER169, LEU64; GLY148; ALA242, ALA189, GLN227; ARG1491, respectively. 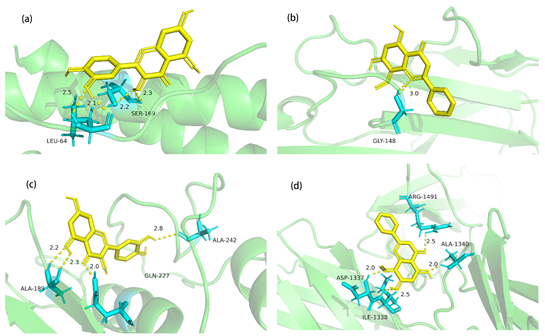 Based on this network pharmacological study, the main core compounds of DHJSD, including quercetin, wogonin, kaempferol, formononetin, baicalein, 7-Methoxy-2-methyl isoflavone, beta-sitosterol and beta-carotene were identified. Both quercetin and kaempferol have anti-oxidative activities, which can protect nucleus pulposus cells from apoptosis, and avoid annulus fibrosus degeneration induced by oxidative stress. Also, quercetin can suppress the secretion and expression of pro-inflammatory cytokines as well as M1 macrophages/microglia-mediated immune response, which might prevent nociceptive hypersensitivity and exert anti-inflammatory effects [14-17]. Wogonin, formononetin, and baicalein have the functions of inhibiting neuro-inflammatory responses, mitigating progression of disc degeneration, and alleviating pain by suppressing the secretion of inflammatory mediators including IL-1β, IL-6, and TNF-α [18-20]. In addition, beta-sitosterol can improve the swelling symptoms caused by pro-inflammatory cytokines [21], and beta-carotene can postpone the occurrence of intervertebral disc degeneration [22]. These results demonstrated in the treatment of LDH DHJSD may exert anti-oxidation, anti-inflammatory, immune regulation, and analgesic effects through abovementioned multiple compounds.

Moreover, the core targets of LDH, including IL-6, TNF, ALB, IL-1β, MMP9, VEGFA, AKT1, PTGS2 and FN1, were found in the current network pharmacological study. TNF, IL-6, IL-1β are key inflammatory mediators, which induce inflammatory response, matrix destruction, autoimmune response, and hyperalgesia [23-27]. MMP9, one member of matrix metalloproteinases family, can hydrolyse and degrade intervertebral disc tissues, leading to IVDD and associated pain symptoms [28]. VEGFA can promote the neovascularization and infiltration to accelerate IVDD [29]. AKT1, activated by VEGF, can promote neuronal and vascular ingrowth and result in pain [30]. PTGS2 (COX2), upregulated by inflammatory cytokines, plays an important role in disc degeneration and painful radiculopathy [31]. FN1 can increase the expression of pro-inflammatory cells, accelerating the degeneration and promoting radicular pain [32, 33]. Thus, these core targets were closely related to the symptoms of LDH, and DHJSD may exert its therapeutic effects by intervening these targets.

In addition, to investigate the role of the active targets of DHJSD in gene function and signalling pathways, GO and KEGG enrichment analyses were carried out. GO enrichment analysis indicated that the effectiveness of DHJSD was mainly reflected in the regulation of receptor and ligand activities, plasma membrane, and biological oxidation processes. In KEGG pathway enrichment analysis, TNF, IL-17 and AGE-RAGE signalling pathways are associated with inflammatory response, immune regulation and extracellular matrix degradation. TNF and IL-17 can activate NF-kappa B pathway to cause inflammation response and immune process via binding to TNFR2 [25, 34] or ACT1 [35]. Also, the activation of NF- kappa B in the spinal cord can cause nociceptive hypersensitivity and pain-related neuropeptide expression to aggravate pain [36, 37]. Moreover, both TNF and IL-17 can induce inflammatory cytokines into degenerated NP tissues and degrade extracellular matrix, which is the main reason of low back pain and sciatica symptoms [38-40].  AGE-RAGE pathway has similar function to TNF and IL-17 pathways [41]. Subsequently, we speculate the active compounds of DHJSD may act on TNF, IL-17, and AGE-RAGE signalling pathways via core targets to exert immune regulation, anti-inflammatory and analgesic effects.

In molecular docking, the main active compounds could bind to the core targets automatically. We found the binding energies of eight core ligands were lower than diclofenac and celecoxib. The lower the energies, the higher the affinities and the greater the possibility of interactions between ligands and receptors [41], this may be one of the explanations why DHJSD has better effectiveness. Moreover, the affinities between PTGS2 and quercetin, wogonin, kaempferol, beta-carotene, baicalein, 7-Methoxy-2-methyl isoflavone and beta-sitosterol, as well as between MMP9 and quercetin and baicalein were strong, suggesting PTGS2 and MMP9 may be the major pharmacotherapeutic targets in treating LDH. Some experiments have confirmed the production of MMPs and PTGS2 in TNF signal pathway can induce IVDD, sciatica, and hyperalgesia [34, 43]. Besides, the expression of MMP9 and PTGS2 can be potentiated via the activation of NF- kappa B, and further induce autoimmune response in IL17 signal pathway [44, 45] or inflammatory response in AGE-RAGE signal pathway [46, 47]. Briefly, the results of molecular docking further confirmed the effectiveness of DHJSD in treating LDH.

There were some limitations in this study. Firstly, the quality of the included trials was low, as most trials lacked details of random sequence generation, allocation concealment, blinding methods, long-term follow-up, and dropouts. Secondly, the heterogeneity was high. After excluding one or two trials, the heterogeneity was decreased in some subgroups. However, in terms of VAS and adverse event rate, the heterogeneity in the subgroup of DHJSD plus Western medicine couldn’t be decreased by sensitive analysis. The high heterogeneity may due to patients’ characteristics, different doses and frequencies of DHJSD and Western medicine used in groups. Thirdly, the current conclusions were concluded based on multiple databases, and further experimental researches should be performed to confirm the conclusions. Therefore, more studies need to be carried out in the future.

In the treatment of LDH, DHJSD had better effectiveness in reducing pain, decreasing adverse event rate, and improving limb function than Western medicine, and DHJSD may mainly act on TNF, IL17, and AGE-RAGE signalling pathways to exert immune regulation, anti-inflammatory and analgesic effects.

This research did not receive any specific grant from funding agencies in the public, commercial, or not-for-profit sectors.