Brain Calcifications: A hallmark Sign to the Diagnosis of Fahr’s Disease; A Case Report

Copyright: © 2022 Sheth IA. This is an open-access article distributed under the terms of the Creative Commons Attribution License, which permits unrestricted use, distribution, and reproduction in any medium, provided the original author and source are credited.

Introduction: Fahr’s disease is a rare neurodegenerative syndrome characterized by bi-hemispheric abnormal symmetrical calcifications of the brain (striato-pallido-dentate calcifications). It can be idiopathic or associated with endocrinopathy and has an autosomal dominant inheritance.

Conclusion: Fahr’s disease should be considered a differential diagnosis in patients who present to the ED with nonspecific neuropsychiatric symptoms. The patient should then be evaluated for associated calcium metabolism disorder. This will help control the severe morbidity and complications from further neurological damage.

“Fahr’s disease is a rare inherited neurological and psychiatric disorder with a prevalence of <1/1,000,000. Its incidence is higher among males, and the typical age of onset in the fourth–sixth decade of life “[1]. Karl Theodor Fahr first described it in 1930, a German pathologist who shared a case of a man with symmetrical calcifications of the cerebral cortex and basal ganglia [2]. The syndrome that bears his name expresses itself in various neurological and mental symptoms. Fahr’s syndrome, also known as bilateral striato-pallido-dentate calcinosis (BSPDC) or Chavany-Brunhes syndrome, is still poorly understood in its pathophysiology and clinical manifestations.

Histologically Fahr’s disease is marked by non-atheromatic compounds symmetrically embedded in a protein-polysaccharide complex incorporated in the globus pallidus, striatum, dentate nucleus, basal ganglia, and also within the cerebellum and in the white and gray matter of the brain [3]. Calcium, zinc, iron, aluminium, magnesium, silicon, copper, and phosphorus are found in the deposits [4]. Clinical characteristics, gradual neurological deterioration, the absence of metabolic abnormalities, and specific radiological imaging findings are frequently used to diagnose. Extrapyramidal symptoms are frequently paired with a frontal sub-cortical pattern of behavioural dysfunction, and symptoms such as psychosis, mood disorder, and dementia are all part of the disease’s clinical spectrum.

The primary supporting examination is a CT scan, which is utilized to assess the location and extent of the calcification. Between 0.3 and 1.2 percent of cases of cerebral calcification can be found by chance on a regular non-contrast CT scan.

We present a case of a patient brought to the Emergency Department with complaints of generalized weakness, headache, and unusual behaviour.

A 56-year-old man with no past medical history was brought by ambulance to the emergency department (ED) with complaints of loss of appetite, generalized weakness, and confusion. His initial blood sugar was 3.5mmol/l leading to a suspicion of hypoglycemia by the paramedics. Hence, the patient was given 100mls of 10% IV dextrose in the ambulance. His vital signs were stable on arrival in ED, with a capillary blood glucose of 11.9mmol/l. There was no fever nor any suggestion of infective symptoms. His GCS (Glasgow Coma Scale) score was 14 on arrival. While taking history, the patient suddenly stopped answering questions, started making incomprehensible sounds, and his GCS deteriorated to 12 (E4V2M6). He was noted to have a left facial droop. One of the diagnoses considered was a stroke, and hence, the stroke team was activated.

When assessing him with the stroke team, his eyes were open, blinking occasionally, but mostly staring blankly with no eye deviation. He would sometimes nod on questioning. All four limbs were rigid with occasional right lower limb small-amplitude rhythmic jerking, and each episode lasted about 5 seconds. He was provisionally diagnosed to have a tonic seizure (first presentation). His NIHSS score of 0 and hence the diagnosis of stroke was excluded.

He was given intravenous diazepam, and the patient was then able to give some history but noted to be incoherent. About 15 minutes after diazepam administration, he could name objects and obey commands, but he was not oriented to time and place. There was no slurring of speech or any facial weakness. The rest of the neurological examination was normal, with full power and sensations. There was no upper or lower limb dysmetria. He was then given intravenous Levetiracetam 1 gm for new-onset tonic seizure. 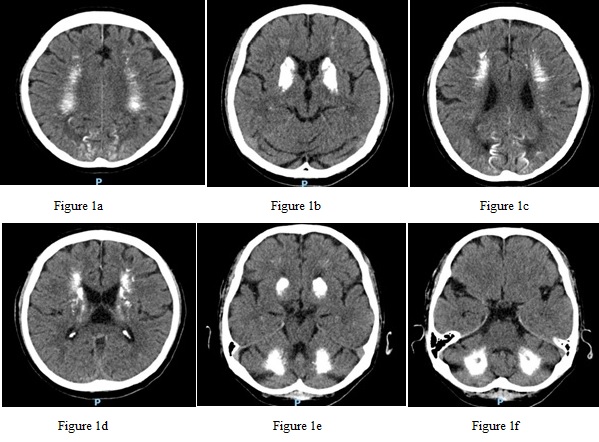 The patient was diagnosed with Fahr’s disease and admitted to the neurology ward. However, his complete blood count, Renal panel, thyroid profile, parathyroid hormone, procalcitonin, serum calcium, and serum folate were normal. He had Vitamin B12 deficiency (serum Vitamin B12 89 pmol/L) and was started on IM B12 injections for five days and oral replacement after that. He was put on oral phosphate replacement for hypophosphatemia (phosphate 0.79 mmol/L). 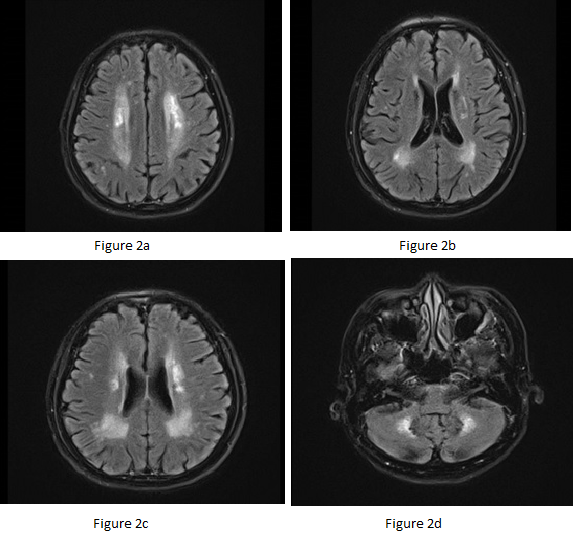 Magnetic resonance imaging (MRI) brain and Intracranial magnetic resonance angiography (MRA) showed T1 hyperintensity in the lentiform and caudate nuclei, the thalami, and the dentate nuclei corresponding with the extensive calcifications as seen on CT. There was no restricted diffusion consistent with an acute infarct. No mass effect, hydrocephalus, or shift of the midline structures was present. The basal cisterns were not effaced.

During admission, the patient underwent a lumbar puncture to rule out meningoencephalitis. Cerebro-spinal fluid (CSF) studies were unremarkable and negative for bacteria, viruses, and fungi. The Mini-Mental State Examination test showed mild cognitive impairment (MMSE score 13/28). His 30-minute awake Electroencephalography (EEG) on Day 4 was normal. The speech therapist reviewed him and found mild oropharyngeal dysphagia and mild dysarthria. The patient was monitored in the general ward and put on fits charting. He was started on oral Levetiracetam 500mg BD which was subsequently increased to 1gm BD on day 2 of admission. He underwent occupational therapy and physiotherapy during his inpatient stay. He had three more episodes of tonic seizures on day 4, day 5, and day 6 of admission, and he was loaded with IV valproate and commenced on oral Valproate at 500mg BD later on. He was stable at discharge and given an outpatient appointment at the neurology clinic.

Fahr’s disease is a neurodegenerative disorder characterized by clinical heterogeneity presenting with a wide array of neuropsychiatric symptoms [6-8]. It is frequently underestimated and underdiagnosed. The prevalence of Fahr’s disease is higher among middle-aged patients. In adults, extrapyramidal disorders, dystonia, ataxia, and Parkinsonism are the most prevalent symptoms of Fahr’s syndrome. Convulsions and pyramidal abnormalities may be observed in some patients, as seen in our patient [9], since individuals with FD may present only with cognitive dysfunction without extrapyramidal signs at the onset. Physicians should consider this complex syndrome to counsel patients and their families with mental deterioration and behavioural abnormalities. The basic techniques for diagnosing Fahr’s disease remain neurological and psychological examinations and CT imaging.

Cortical and basal neuron loss is closely linked to the pathogenesis of cognition disorders, which involves the destruction of brain connections between ganglia and cortex, resulting in frontotemporal atrophy, the formation of neurofibrillary cortical aggregates, as well as deficits in cortical and basal neurons. Fahr’s disease’s psychotic symptoms are similar to those of secondary psychotic disorders, and they include persecutory delusions, a hallucination of auditory, visual and olfactory, and ideas of reference and influence [10].

Fahr’s disease is known to have an autosomal dominant inheritance [11]. Other than underlying calcium metabolism disorder, hypoparathyroidism or pseudohypoparathyroidism, it has been known to occur due to other factors like developmental, genetic, metabolic, infectious, sporadic, anoxic conditions [12, 13].

We diagnosed Fahr’s disease in our patient based on the diagnostic criteria (adapted from Moskowitz et al. and Ellie et al.) [14, 15] in the following manner: progressive neurologic dysfunction, radiographic evidence of bilateral calcification of the basal ganglia, and other parts of the brain, and the absence of biochemical abnormalities, toxins, trauma or other systemic disorders.

To meet the diagnostic criteria, the following laboratory investigations are usually done to exclude other causes of brain calcification such as routine hemogram, metabolic panel, serum calcium, phosphorus, magnesium, alkaline phosphatase (ALP), calcitonin, vitamin D, parathyroid hormone(PTH), cerebrospinal fluid analysis for bacteria, virus, and parasites with imaging studies such as brain CT scan which is the most sensitive modality in localizing and assessing the extent of calcium deposits. Our patient underwent all these investigations before being diagnosed with Fahr’s disease.

Even though Fahr’s illness is an uncommon condition, it can cause serious consequences such as dementia, psychosis, speech difficulties, contractures, and epilepsy. The calcium deposits on CT scans are usually seen in the globus pallidus. However, they may also affect the putamen, caudate nucleus, thalamus, dentate nucleus, and white matter of the cerebral hemispheres [16] in fig 1 to fig 6 in our patient. The pineal gland accounts for 60% of intracranial structures that calcify and are considered physiological with aging. In comparison, the habenular commissure accounts for 30%, the choroid plexus accounts for 10%, the dura mater accounts for 7%, the petroclenoid and interclenoid ligaments account for 12%, the pituitary gland accounts for 12%. The carotid arteries account for 12% [17].

Fahr’s disease should be considered a differential diagnosis in patients who present to the ED with nonspecific neuropsychiatric symptoms. We want to highlight the importance of distinguishing between symptomatic and asymptomatic cases of Fahr’s syndrome. It is also essential to detect underlying calcium metabolism abnormalities, particularly hypoparathyroidism. Correction of these abnormalities is the only causative treatment that can significantly improve symptoms and prognosis. The widespread use and advancement of brain imaging modalities have aided in diagnosing Fahr’s syndrome. Despite this, their genesis is only partially known, and treatment options are limited.

The authors declare that they have no conflicts of interest.